We were delighted to have eight gardens from Linden to Lawson in the mid-Blue Mountains showcasing this year. From homely rustic patches to charming cottage-style and established formal gardens, there was something for everyone to enjoy and explore, as well as a Scavenger Hunt for the little ones. 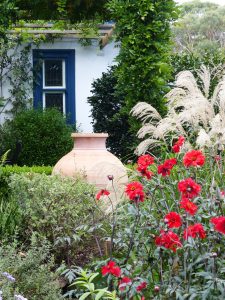 A modern garden, lovingly designed by its landscape designer owner. An informal mixture of classic Mediterranean and Spanish mission-style, the garden complements a 1920s bungalow with extensive views and showcases how low maintenance design can work with its water-wise plants, including many rare species of succulents. The patio area has also been updated since the last Festival.

David is a landscape designer who has been part of the Festival since 2017. When David and Amber moved to the property in 2006, Aldebaran was created in a large part to realise David’s lifelong dream of having an open garden to share his appreciation of plants with other garden lovers. 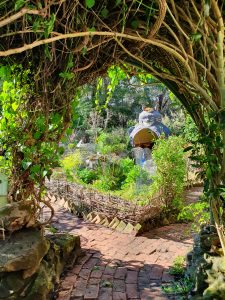 Named after a Japanese Anime Nature Spirit, this rustic cottage-style garden grows on a terraced slope, with an emphasis on scented, medicinal and edible plants. Look closely and you’ll find fantasy sculptures based on films the owners have worked on, peeking through the foliage, and whimsical objects cleverly repurposed from recycled material, creating a garden that is brimming with energy and creativity. Don’t miss the succulent flowered earth roof, a new walk-in planter enclosure and the revamped cosy Teahouse inspired by Totoro himself!

Marilyn and Lewis worked for years in a tiny terrace in the city as film technicians and artists, but Marilyn always wanted an earth-roofed house and cottage garden – hobbit-style. Totoro became a reality in the early 90s, with Lewis’ large film sculptures as garden art. 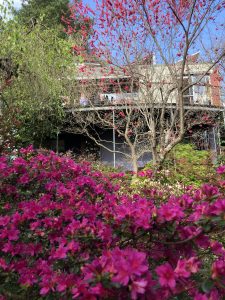 This classic, established mountain garden has been part of the Festival for an incredible twenty-eight years. It has become an annual favourite and features weeping maples, camellias and ferns with pathways that meander down past ponds and ancient bush rocks, waiting to be explored. The graceful lines and curves of the garden are reflected in the contemporary home.

Brian and Jo have a strong commitment to public education. Brian was an art teacher and Jo taught English and worked as a psychologist. Their neighbours’ children all attended Hazelbrook Public School, and the children’s parents were closely involved in running the garden festival for years, so, from 1994, it was natural that they would support the Festival and thus the children of the school. 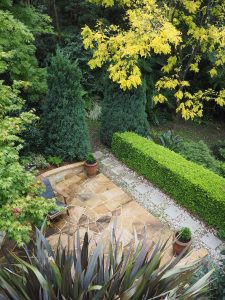 A wonderful terraced garden developed over 20 years.  The street-level hedges hide a surprisingly large and varied garden. Rest awhile on a wooden bench amongst maples, crepe myrtles, philodendrons and tree ferns before descending further to discover a bridge leading to the bush. There is something for everyone in the open spaces and dappled shade beyond.

Chris is a former art teacher and Lindy has had a long career in child protection. As retired public servants, they have been able to pursue their various artistic interests, enjoy their recent role as grandparents and work on their garden. They have seen how important fundraisers have been to schools so was happy to be able to contribute to this one for Hazelbrook Public School. 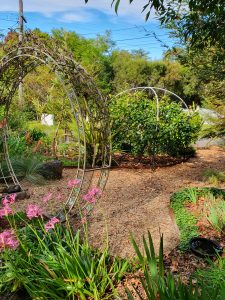 A beloved garden on a corner block, with a bit of everything. There’s something wonderful to explore at every turn. Discover an amazing array of succulents, award-winning blooms, and a shade house filled with a variety of orchids and ferns. Every bit of space has been cleverly utilised to create this lovely cottage garden.

Marion is a long-time member of the Central Blue Mountains Garden Club. When she married Andy in 2004, the corner block started its transformation into Arcadia. Marion has always loved visiting other people’s gardens and the Festival allows her to share hers in return. 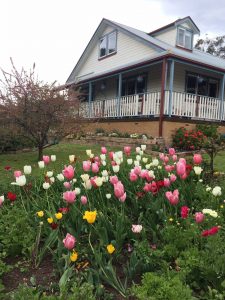 Started 10 years ago, this Festival favourite has a lovely front garden and unique terraced back’yard’ which combines decorative and produce planting. It is home to exotic and native plants, hundreds of bulbs, handmade wooden paths, lots of gnomes and cheery chooks, a large collection of fuchsias and much more. Since the last Festival, a large greenhouse, a flower-filled rotunda, and a young olive grove has been added. All the fruit produced here goes into delicious homemade jams and sauces which are for sale throughout the Festival.

Andrew and Norma moved from Penrith in 2010 and have always had a keen interest in gardening. Norma’s love of flowers and Andrew’s of growing fruit has resulted in Tarraleah. They have been part of the Festival since 2014 and enjoy sharing ideas and having conversations with other garden lovers. 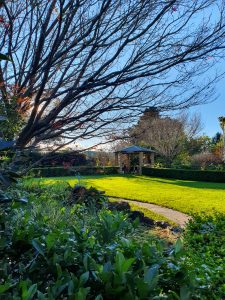 As fans of The King, this garden was inspired by his song ‘Follow that Dream’.  Initially a productive garden, 2002 saw the start of its transformation into the owners’ semi-formal European style dream garden. Now lush lawns, decorative plants and ponds mingle with the remaining fruit trees and a small veggie patch, creating a tranquil haven to relax and unwind. (Bonus: On your way into the garden, feast your eyes on a treasure trove of the owners’ Elvis memorabilia collection in the garage).

Jim has worked in nurseries, been a gardener, and performed many Elvis gigs on the side. Frances is a nurse who also shares Jim’s love for The King. Both their kids went to Hazelbrook Public School so being a part of the Festival seemed like a nice way to give back. 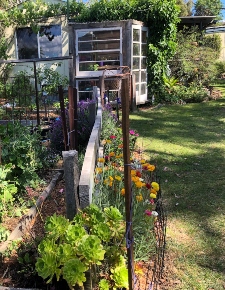 Nestled amongst majestic gum trees in a quiet mountains street is this gorgeous rustic patch lovingly transformed about six years ago by the young family that lives there now. Named after the Dharug word “to grow”, this garden is the beating heart of a resourceful family which features a thriving mix of natives, vegetables, fruit and flowers, a treehouse, mud kitchen and is where happy bees and chooks reside as well. An inspiring place to charm the young and old.

Ana and Carl’s property had barely anything but grass, weeds, and a few big eucalypts growing when they moved in. They then grew three children and quickly realised gardening could offer some sanity amongst the chaos. One of the principles the couple lives by is to give things a go, and Djurali is the result. Although the youngest garden in the Festival, they hope it’s one that encourages others to give it a go too.